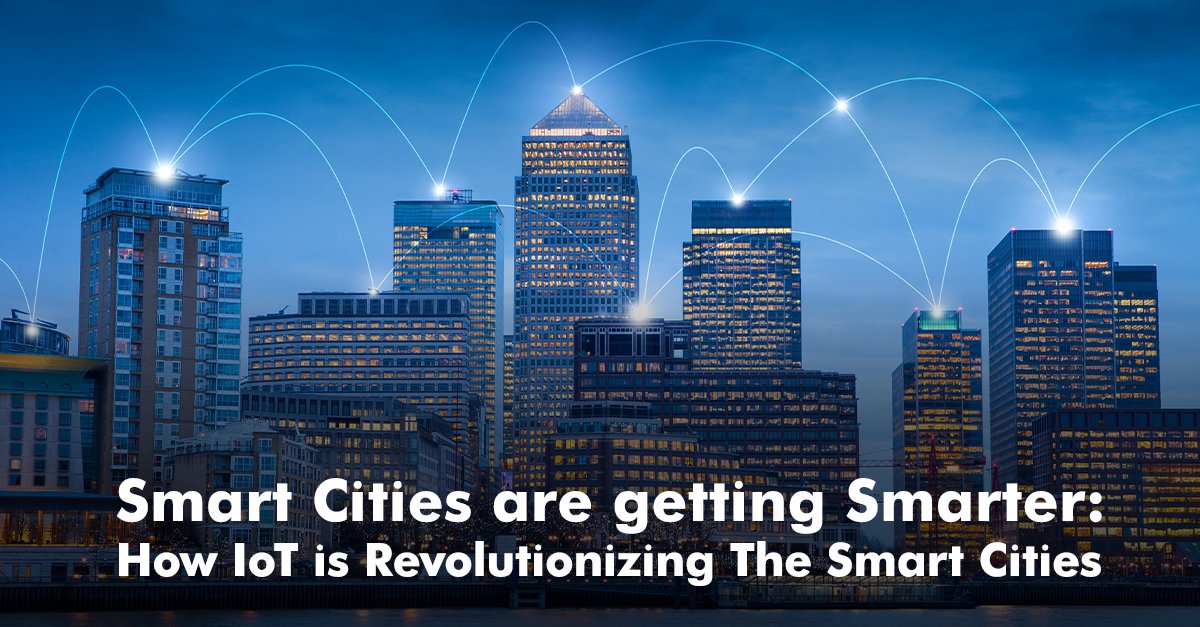 Smart Cities Are Getting Smarter: How IoT Is Revolutionizing The Smart Cities

“The Future of Smart Cities is not only about inculcating the IoT solutions and technology but also the Smart implementation of these IoT solutions to enhance the infrastructure, improve the environment, and promote sustainable solutions by improving the transportation systems and optimizing the costs of public assets.”

In today’s time, where the global population is on a surge, rapid urbanization is taking place. And also, cutting-edge digital technology is thriving everywhere. It has become imperative to make Smart Solutions a part of the Cities, making them Smart Cities. The concept of a ‘smart city’ refers to a sustainable framework that uses data and technology. Smart Cities inculcate Smart solutions which take the help of IoT to enhance efficacy and optimize operations.

In layman’s language, the term IoT refers to interconnected digital devices which can communicate and interact with others through the internet worldwide. And are remotely monitored and also controlled.

The IoT (Internet of Things) includes smart sensors and other devices. It also considers the operational usage of the technologies to attain the desired efficiency. IoT bridging the gap between the technological aspects and operational aspects by bringing them together. For instance, on the operational level of IoT, the weather data is collected, which further offers new opportunities for cities to use the data to cut pollution. It also helps to manage traffic, making better use of resources sustainably.

Transforming any city into a smart city needs an active deployment of IoT technologies and the smart implementation of these deployed technologies. According to Statista, the proportion of people residing in urban areas will rise to 70% by 2050 compared to 56% in 2020. Due to the easy penetration of the 5G and 4G across the world, the internet’s extensiveness across global regions has increased. It is making Smart Cities’ viability even more effective. Internet penetration is the core of IoT applications.

Apart from the easy widespread internet connection, better gadgets with sophisticated sensors and Wi-Fi connectivity contribute to the smarter application of the Internet of Things. Smart Cities are getting revolutionized rapidly, making the world an all-new place to live with its digitally evolved form.

With the rising advent of the Smart City concept, the cities are creating situations for continuous development with digital technologies. It is becoming increasingly important.

Environmentally, the cities are becoming more aware of their CO2 emissions. They are also focussing on keeping their CO2 emissions as low as possible. Smart cities are investing in electric cars and self-propelled vehicles. For instance, Siemens recently developed a complete, cloud-based software-suite, “The City Air Management Tool (CyAM)”.  It captures air pollution data in real-time and forecasts emissions updating up to 90% accuracy.

Most of the larger cities have a tremendous amount of traffic owing to the enormous population, and hence they face challenges to handle. Furthermore, the optimization of significant traffic becomes of utmost importance.

Parking issues are prevalent. And Smart City solutions make Smart parking an integral part of it by combating this and leading to an efficient, intelligent smart solution. It has sensors in the ground report via the drivers’ smartphones. It is where they can find a free parking space to park their vehicles. Also, it gives other vehicles the feedback to precisely know the openings. Like, where the openings are and nudge waiting for cars towards the path of least resistance.

These days, the smart party has become a reality. And it does not require complicated infrastructure and high investment, which makes it ideal for a mid-size Smart City. Not only this but also Smart Lighting contributes a significant part of Smart cities, which is again a massive revolution of IoT devices and adds to achieving an energy-efficient and environmentally friendly infrastructure.

The collection of waste in large cities used to be one of the significant issues. With Smart cities the IoT-based waste management solutions, waste collection is seeing the different days of the light. It is helping to optimize the efficiency of waste collection.

It is also based on IoT, the waste container receives a level sensor; with a threshold level which once reached its limit is notified to the truck driver via smartphone with a message to empty the full container and avoid half-empty drains.

It goes without saying that by making efficient use of IoT technologies, the Smart concept is revolutionizing Smart Cities. It leads to a better, efficient, and sustainable world where cities are more digital, smart, and provides easy and comfortable living. But at the same time, it comes with inevitable roadblocks. These roadblocks make it challenging for an efficient implementation of smart Cities.

Smart Cities creates a supremely computerized environment using modern technologies such as IoT, machine learning, and artificial intelligence. Hence, there is always a risk of failure of the entire technology ecosystem, and hence a proper backup system is needed. Also, data theft and data leakages are issues those emerging technologies have faced repeatedly. Therefore, ensuring data encryption is of utmost importance.

Moreover, collaboration with digital transformation experts and software testing providers is a must-adopted practice for implementing IoT for Smart Cities. The demand for such professionals will keep on rising in the days to come. Because they are experts in remodeling multiple cities around the globe.

Smart city solutions have a very bright future in the years to come. Above all, it is one of the revolutionary aspects of digitization. With large-scale implementation, thoughtful deployment, and careful management, the IoT, big data, urban data platforms, and AI can transform our urban hubs into smart. These also can be sustainable, and efficient spaces. The basic rule to success lies in the shared use of information which promises to make smart cities smarter than ever before.